Over on Todd Nauck's site, he's showing a print that he's selling through his site and he'll have at the New York Comic Con next weekend. 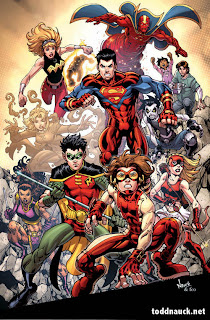 It's a fun Young Justice piece, with Red Tornado right there front and center. He even included Traya. I like the more robotic version of Red Tornado that Nauck draws. If I remember correctly, this series followed Primal Force wherein Reddy was drawn at his most inhuman (save for the Ulthoon/Tornado Tyrant appearance). It's fun to see how much liberty each artist takes when given the task of drawing Red Tornado.

I'll admit, even though Reddy was part of the "team" I missed out on a lot of the Young Justice hullabaloo back in the day, but maybe I'll correct that oversight with the "new" Young Justice coming up this fall. I just couldn't justify that book back when it was coming out. I don't regret not getting it, as I would check in from time to time, but I most certainly do not have the full run.

That said, DC is releasing a series of Young Justice mini-trades or super-sized issues or some such under the banner of DC Comics Presents: Young Justice. The first three have been solicited and carry a $7.99 pricepoint. They clock in at 96 pages and they seem to be pretty scattered with regards to where the material stems from, so maybe I need to start hitting the bargain boxes.

Whatever develops, I'll be bringing the results right back here.
Posted by Doug at 7:05 AM