Over at Comic Book Movie, Ed Gross popped out an interview with Brandon Vietti and Greg Weisman, the producers of this fall's Young Justice cartoon.

Among the noteworthy news in the interview is a spoiler regarding the origin of the new Aqualad and this lovely interchange:

SUPERHERO TOONIVERSE: What kind of role does the Justice League play?
GREG: Some play more than others – Batman and Red Tornado have really big roles in the show, on an ongoing basis. Some characters like Superman, Martian Manhunter, Black Canary, Green Arrow, Aquaman, and Flash have large roles in the show, others have lesser roles. Captain Marvel has a big role – Captain Marvel’s being played by Rob Lowe.

I've been looking forward to this series for a little while now. Every little bit extra I see or read, though, gets me more jazzed for it.

Aw yeah! Back to school!

A few years back, the governor of the lovely state of Michigan declared that public schools in Michigan cannot begin before Labor Day. This was a move on her part to help boost the tourism income. Except Labor Day is a three-day weekend, and starting the day after Labor Day truly makes no difference whatsoever on when people return from their trips. The only economic goose it may have given is to Friday before the weekend, but even that is suspect.

At any rate, there's still a good two weeks until school starts here, but school supply shopping is in full swing. Every loaded backpack needs something super, though. God help us all, but Wal-Mart is bringing the super. 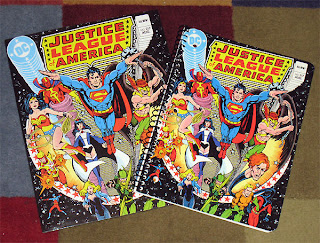 A wonderful folder and notebook set, featuring the George Perez art from the cover of Justice League of America #217. I'll come back and talk about the story later, or you can check it out yourself at Rob Kelly's sensational JLA Satellite blog. 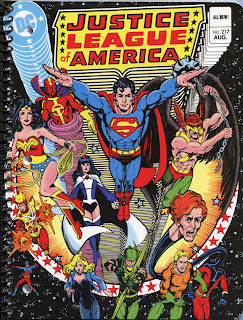 The cover really puts the heroes out there for us, and not just the same old Batman, Superman, Wonder Woman, and Green Lantern. As you can see Superman and Wonder Woman are present and accounted for, but this image also has Hawkman, Firestorm, Aquaman, Elongated Man, Zatanna, Green Arrow, Black Canary, Atom (who got really lucky with the hole punch) but especially good, old Red Tornado. Reddy holds a special spot on this cover, notebook, and folder - right between Wonder Woman and Superman.

Very special thanks to Shag of Firestorm Fan and Once Upon a Geek for the heads up on this one.
Posted by Doug at 6:27 AM 1 comment: