So we've had this fun conversation bouncing around the Blogosphere about propping up the readership of some of our favorite, but less followed titles. I struggled with this one quite a bit. I covered American Vampire in detail over at My Greatest Adventure, but figured I'd give a little shout-out to some League-mates of Red Tornado in the form of DC's Zatanna and Booster Gold titles. 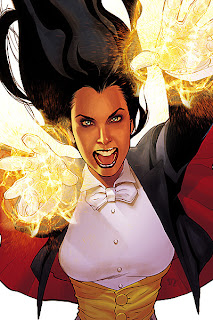 I have to admit, my first exposure to the Justice League of America was through the Super Friends. That eventually led me to the JLA comic, which I've covered in nauseating detail here. For whatever reason, when I started on Justice League of America, Zatanna was not on duty. I did eventually meet her in JLA adventures pursuant to the comic I first purchased. Zatanna had a fortitude that wasn't common among her fellow heroes as she was one of the few who chose to remain loyal to the League when Aquaman disbanded it. Red Tornado, Green Arrow, Black Canary, Hawkman, Hawkwoman, and Firestorm all walked away. Aquaman disbanded the group, but did so to preserve the League. With Zatanna, Elongated Man, and Martian Manhunter by his side, Aquaman was determined to build a Justice League that the world could count on. The end result was the much-maligned Justice League Detroit.

Once that iteration of JLA finished, Z meandered her way throughout the DC Universe, popping up here and there. She enjoyed a couple of miniseries, including her involvement in Grant Morrison's critically acclaimed Seven Soldiers, as well as a special or two. She'd pop up in the occasional JLA issue or guest star in Batman or Detective, but it wasn't until Identity Crisis hit that Zee got a larger beam of the spotlight. There it was revealed that Zatanna had single-handedly (albeit under duress) altered the course of the Justice League and the DC Universe itself. 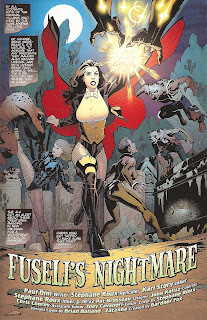 All the way along Paul Dini harbored a mad crush on Zatanna Zatara, going so far as to irrevocably tie her into Batman's mythology on Batman: The Animated Series. From there it was only a matter of time before Dini found his way to comic book writing. Once established as a writer, Dini set the goal of bringing Zatanna's adventures to four-color glory. Her appearances in Dini's Detective paved the way for Dini to give Zatanna a chance to star in her own magazine. 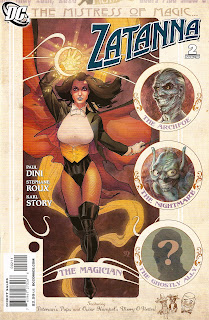 Dini quickly established a feel for the series, dividing Zatanna's time between her career as a stage magician, her calling as a protector of humanity, and her sideline gig as a superhero. In doing so, Dini has freely woven in appearances from other members of the DC Universe, such as Vixen and Black Canary, while also establishing new supporting characters for Zatanna, such as her stage crew and her detective friend, Dale Colton.


Dini has also set about establishing a collection of foes for Zatanna. Primary among these is Brother Night, Zatanna's primary adversary throughout the first three issues of this series. Set up as a demonically powered Charles Manson type, Night is an impressive foe for Zatanna and a nice cornerstone to build a rogue's gallery around. Additionally, Dini introduced Fuseli, a demon who draws power from instilling nightmares upon people. Named after John Henry Fuseli's painting of the same name. Night and Fuseli are depicted on Stephane Roux's cover to Zatanna #2 pictured above and to the right. 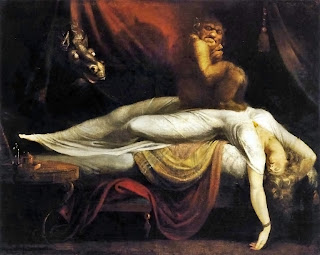 Joining Dini - at least on the initial arc - was Stephane Roux. Roux draws a fine looking Zatanna, but also delivers the creepy, cadaverous, and cool with equal aplomb. While his last issue was apparently #3, Roux continues on the covers currently, and the title seems to be in between regular artists. The upside to that is that artists such as Jesus Saiz, Yanick Paquette, and Cliff Chiang will be contributing to this title in the months to come.
This title started out with a very solid offering, but the art switch seems to have caused some readers to balk. Rest assured, Dini is still bringing his best to Zatanna, and she has fought a different interpretation of the Royal Flush Gang, caught up with her cousin Zach, and is currently matched against a casino owner in Vegas. Through it all, Dini doesn't bury his character in mystical mumbo jumbo. Zatanna's power is pretty straigh 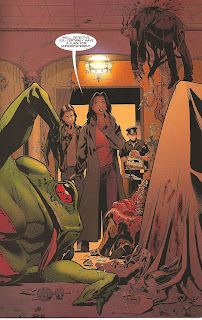 t forward - or, rather, straight backward - as her spells are cast when she speaks backwards. Reading Zee's speech balloons is a nice exercise to help your brain stay limber, especially if you actually try to read them out loud.
Dini's stories are easily approachable for newbies and rewarding for those who have been on from the beginning. The stories themselves are enjoyable and engaging, and Dini does a great job of mixing up magic, heroing, performing, and just being human. Zatanna is a wonderfully human character and this title is a joy to read every month.


The fifth issue hit the new comic racks two weeks ago, so it shouldn't be too difficult to find the back issues if you're a completest, or you can simply wait until issue #6 hits in less than a month. If jumping in midstream is troublesome for you, a new storyline begins in issue #7, set for an October 27 release.
Kcehc ti tuo!
Booster Gold
I was all set to make Booster Gold my number one with a DC bullet selection for the Read This Too! event, but then it was brought to my attention that one of my co-bloggers had a site devoted to Skeets' best pal. Still, Booster Gold is a title that deserves a little more attention, and I do have a whopping three followers (Hi Dan, Shag, and Rob!) so I could still do right by my favorite hero from the future.
Buy Booster Gold.
There. Done.
On a more serious note, Booster Gold is one of those comic books that everyone whines that "they just don't make any more!" It's a superhero comic book that doesn't pretend to be anything else. Sure, it has healthy doses of time-travel and the paradoxes, what-if scenarios and hyperbole that time travel brings, but at its heart, it is a comic about a man trying to be the very best he can be while helping inspire those around him.

Originally introduced in the 1980s by Dan Jurgens, Booster Gold is a character from the future who came back to make himself a hero. A raging egomaniac, Booster soon emerged as an iconoclast of the hero set, breaking the unspoken rule that forbade endorsement deals. This has been played up to various levels in the character's history since, never moreso than in 52. In 52, however, it was revealed that Booster is mcuh deeper than he appears and this series builds upon that. Spinning out of the 52 series from 2006-2007, this second volume of Booster Gold gives Booster a chance to be "The Greatest Hero You've Never Heard Of!" as he tries to right temporal wrongs with the help of Time Master, Rip Hunter.
This series started off co-written by Geoff Johns and Jeffrey Katz, and was drawn by Dan Jurgens through issue #10 (which was actually the twelfth issue of the current series - agh! time travel!) after which Jurgens found his way to writing and drawing the series. In an attempt to boost sales and to weave a link between Booster Gold and Justice League: Generation Lost, Jurgens stepped aside (he's currently cranking out Time Masters) to let Keith Giffen and J. M. DeMatteis take over the writing chores. The duo set Booster upon the path of trying to oust Maxwell Lord, which is where the title is today. Many presumed that the writers responsible for the Bwah-ha-ha years of the Justice League would revert the character that Johns, Katz, and Jurgens (not to mention Morrison, Waid, and Rucka throughout 52) worked so hard to evolve. That is entirely not the case. There is a great deal of humor present in the title, but very little of that comes at Booster's expense. Like life, funny things happen to and around Booster. The reader gets the benefit of a chuckle in this case.
The great thing about this iteration of Booster Gold is you can never be certain who or what is going to appear. This series has given us visits from Elongated Man, Leonardo daVinci, Mr. Miracle, and Barry Allen, among other characters. There are moments in DC history, such as the New Teen Titans' fight with the Grant Wilson iteration of Ravager, that are revisited and alternate realities that are tapped into. Wonder Woman didn't kill Max Lord before his nefarious plan was set in motion? Yeah, that happens here.

For the most part, Booster Gold has been an all ages-friendly book, a rarity in superhero comics nowadays. I say "for the most part," as Giffen and DeMatteis have added a little more racy quality to the title of late in the form of some more adult-branded humor, inferred situations, and innuendo. None of that drives the book, however, it's just part and parcel to what Giffen and DeMatteis bring to the story. 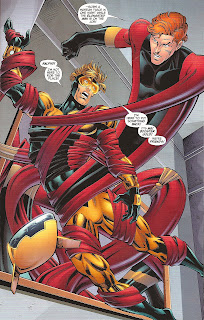 Booster Gold is a fun, sometimes frenetic comic that revels in superhero action, extreme situations, and entertaining stories. This is a title (moreso with Jurgens) that is inline with what Mark Waid was doing on the Flash title back in the 1990s. There are a number of trades and collected editions available for you to get caught up on the adventures of Booster Gold. Issue #37 is set to release on October 13, and offers a great chance to jump into the world of Booster Gold with both feet.
Lest we forget about Red Tornado himself, he'll be appearing in the upcoming DC Comics Presents Young Justice issues, the first of which hits on October 27.

So there you go. I can't give props to a Red Tornado comic mainly because there isn't one, but I can provide you with a couple heroic recommendations. Check them out, won't you?

Mad love and props to Kelson Vibber from Speedforce.org in organizing this wonderful celebration of the obscure and overlooked. Siskoid deserves high-praise for his hand in crafting the banner flying overhead and Walter of Boosterific helped set up this wonderful list below:
Interested in reading more? Good! Check out the lesser-known titles reviewed in these other blogs and "Read These Too!":
Adam Strange at It's A Dan's World
Astro City at Speed Force
Essential Man-Thing at Firestorm Fan
Forgetless at Girls Gone Geek
Franklin Richards digests at Once Upon a Geek
Glamourpuss at Being Carter Hall
Peter David's Hulk at Fortress of Baileytude
Jonah Hex at Boosterrific
Scott Pilgrim at Toyriffic
Son of Tomahawk and Thor the Mighty Avenger at Aquaman Shrine
Spelljammer at HeroPress
Spire Christian Comics at Mail It To Team-Up
Strange Science Fantasy at Siskoid's Blog of Geekery
R.E.B.E.L.S. at Indigo Tribe
The Unwritten at K-Squared Ramblings
Welcome to Tranquility at Girls Gone Geek
Posted by Doug at 5:01 AM