My pal, Dan, of It's a Dan's World fame had some splendid coverage of the revelations and announcements from SDCC. One of those updates included this gem of Red Tornado having a chat with the team. Seems like old times: 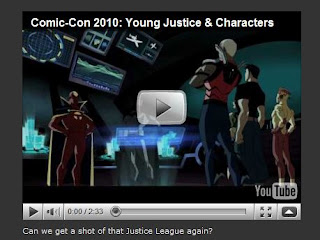 Reddy here looks a little more robotic, kind of like he did in the Young Justice comic series, than he does in comics nowadays. Personally, I'm a fan of Reddy having a more robotic vibe, as he does here, as he did in Primal Force, as he does on Batman: The Brave and the Bold.

I'll share a little bit of what I gleaned from the video clip here. The clip reveals that the League plays an integral part of the new series, and that League is sixteen members deep.

Additionally, Robot 6, one of the member blogs of my homebase of Comic Book Resources, reports that Peter David will be stepping in to craft an episode (I originally typed "issue") of the series.

Young Justice hits the Cartoon Network this November. Get those DVRs tuned up.
Posted by Doug at 6:29 AM 2 comments: