Let's get it started!

Quite a while back, during the Super Powers 25th Anniversary blogathon, I grabbed this blogspot as a placeholder, fully intending to give some love to Red Tornado on the eve of his all-new six-issue mini series by Kevin VanHook and Jose Luis. Unfortunately, life got in the way, and when you try to balance being a father of three, reviewing four (or more) or more comics a week, along with the rigors of a 9-5 job, some things slide. 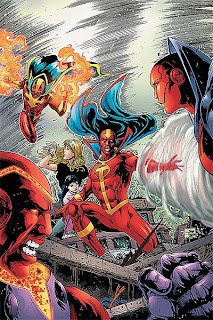 One of those things that slid a bit was my Doom Patrol blog. I'm trying, I really am, but like this spot for Reddy, the DP blog doesn't get as much love as it deserves.

I'm going to make a stronger effort to get some content on both blogs with greater frequency.

Reddy's enjoyed quite a bit of popularity of late, with numerous appearances on Batman: the Brave and the Bold, consistent page time in the JLA book, and more than a few toys and collectibles produced in his likeness. My hope is to cover those and more here.

Swing by next week, and I'll clue you in as to why Reddy's a fave of mine. Until then, here's a link to a small clip of Reddy's appearance in the Justice League: Crisis on Two Earths DVD that just released. Thanks to Shag for the link!
The image above is courtesy of DC Comics from their website.
Posted by Doug at 6:42 AM 1 comment: