Save for some appearances in the backup stories in Justice League of America, Red Tornado's been on the downlow (much like this blog) lately, but he gets some love this Wednesday in the form of DCU Legacies #5. The Legacies book has been a fun read, revisiting teams, characters, and timelines and freshening them up a bit. It's not quite the same as the History of the DC Universe book that came out in 1986, but it isn't intended to be.

It's a bit Marvels meets James Robinson's Starman, for lack of a better comparison in my mind, in that, as Starman had the O'Dare family, this story follows Paul Lincoln, a police officer who reflects back on the things he has seen during his lifetime.

The best part of the series, to me, is the art. Yes, Len Wein is a consummate professional and a living legend when it comes to writing comics, but how often can you stop at the comic shop (or open a box if you get your comics through the mail) and pick up a new floppy featuring art by Joe Kubert and his son, Andy, José Luis Garica-Lopez, J. H. Williams III, Dave Gibbons, Walt Simonson, or George Pérez?

As if you needed a reason beyond the fact that this issue features art from gorgeous George Pérez, the issue coming out tomorrow takes a look at the classic Crisis on Infinite Earths. Here's the cover. 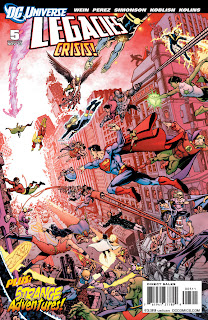 Did you notice Red Tornado right there in the middle? Yeah. Me too. Crisis, for me, is the ultimate event book. Yes, there were a lot of tie-ins and crossover issues, but the main story itself is a classic that DC has managed to get me to buy at least three times: floppies, trade, and Absolute.

Those who know me or those who have read my reviews in various places know that I have an affinity for what I call "summer comics." These are comics that are action-packed, smartly-paced, fun reads. In short, they are what comics should be like if done right. To me, the action, adventure, locations, characters, art, and story make Crisis the ultimate summer comic. It's a book I go back to time and again. As a matter of fact, I might be due for a dose of it real soon.

It's great to see the anti-matter wave and red skies chosen as the setting for the Crisis issue of Legacies. With the hundreds of characters Pérez drew in the series, he easily could have put any combination of characters on that cover. I find it all the more interesting that he chose to add Reddy, and in such dramatic fashion too.

Here's the solicit text for the issue:

Red Skies hang over the entire DC Universe as each and every hero on Earth gathers for what will be the first in a series of universe-spanning Crises!

Meanwhile, Walter Simonson helps us shift the focus from Earth to the heroes of outer space – and beyond!

Drop back by later in the week for a recap of Reddy's contributions to this issue.
Posted by Doug at 7:47 AM