At the ripe young age of nine, my life was changed forever one Friday evening when my brother and I went up to the local convenience store with our allowance.

We each had 50¢. That's right, a Kennedy half-dollar-sized hole was burning through my hand the entire walk of the short side of a Toledo city block.

All the way there I had visions of jawbreakers, Slim Jims and Dina-Sour Eggs in my head, but when I got there, like any impressionable youth, I decided to see what was going on in the comics. What was Spider-Man up to? Who was Batman fighting.

The I saw this: 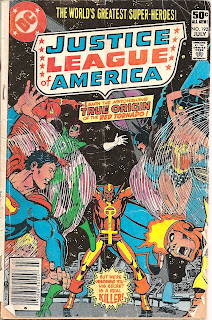 . . . and nothing was ever the same. Of course it was in much better condition when I bought it, but this is the first comic I ever bought with my own money. It took my entire allowance that week, but damn, it was so worth it.
Posted by Doug at 12:05 AM