So after buying the comic, I began walking home with my brother, my pace slowed dramatically by the gravitas of the situation unfolding before my eyes. 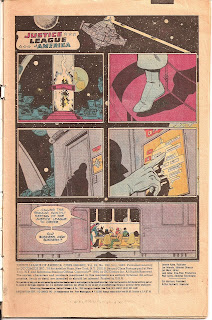 The Super Friends were in space! For real?! 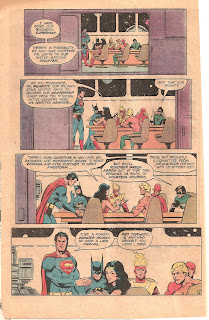 I knew almost all of these characters, and some of the ones they were talking about from the Super Friends cartoon. I didn't know that guy with the flaming head, but face it, with a visual like that, I was going to remember him for a long time to come. 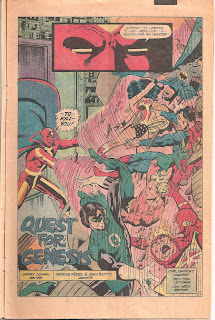 Just like that, this Red Tornado - who I had never met - took out the Super Friends - er, Justice League of America. Bam. I was hooked. 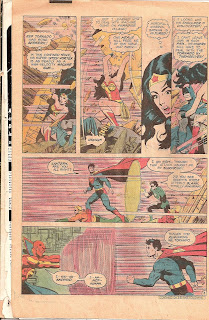 Real heroes are never truly defeated though. After all, we're talking about Superman here. . .

I had read comics before this - Spider-Man, Marvel Team-Up, Fantastic Four, Batman, Detective, and of course some Archies. This one 50¢ comic forever changed how I viewed the four-color medium though. It wasn't just a comic. It was art. It was entertainment. It was escapism, and Red Tornado was leading the charge.

Written by Gerry Conway, and stunningly drawn by George Pérez with John Beatty on inks, this book did me in. The characters were awesome, the story was intense, and this issue was shortly after Firestorm had joined (although I didn't know that at the time). Firestorm provided the perfect gateway for an impressionable nine-year-old to learn about comics and superheroes the DC way.

Firestorm, Red Tornado, and I became lifelong pals with this issue. I know, at this point, Red Tornado doesn't seem too friendly, but he eases up. You'll see. . .
Posted by Doug at 1:18 AM